Can you picture 469 miles of natural splendor? Splendor that runs from Virginia through North Carolina and connects the Shenandoah National Park with the Great Smoky Mountains National Park? If you can, chances are you have explored the Blue Ridge Parkway!

Stunning long-range views and more than 100 trails comprise “America’s Favorite Drive.” The Parkway is more than a visual treasure! There are campgrounds, biking, musical events, arts and crafts (the Folk Art Center), hiking, historic as well as interpretive sites (including Revolutionary War sites and the Museum of North Carolina Minerals).

What is the best part? The Blue Ridge Parkway is free and open all year, depending on winter weather. In North Carolina, elevations on the Parkway range from 600 feet to 6,053 at its highest point at Richland Balsam Overlook.

The Parkway’s majesty is on full display in autumn when golds, reds, yellows and rust colors dominate the landscape. This is the most popular time of year for visitors and for good reason! The views are spectacular.

You will find ways to access the Parkway at all major federal and state highways. Asheville and Boone, NC are the largest cities along the Parkway. Keep in mind that GPS does not work well on the Parkway. Keep your eyes open for the milepost markers instead.

Driving the entire 469 miles of the Parkway from Afton, Virginia to Cherokee, North Carolina is estimated to take at least 3 days. The two-lane route has a speed limit of 45 mph and traffic can be heavy in autumn. Check maps to see which portion(s) of the Parkway interest you the most.  Maps are available online at such sites as: virtualblueridge.com.

We explored a large portion of the Blue Ridge Parkway (BRP) in North Carolina and want to share our favorite overlooks and places on the North Carolina section of the Parkway for enjoying rich autumn colors, summer flowers and other delights.

We had limited time so we began our drive in Cherokee, North Carolina-the southern end of the Parkway and drove north.We spent an entire day driving from Cherokee to the Linville Gorge.

In addition to our favorites, there are additional “best spots” on the southern portion of the Parkway like the Blue Ridge Parkway Visitor Center, Asheville, and a side trip to Chimney Rock State Park. There is SO MUCH to see and do!

There is also more to be experienced north of Linville Gorge where we turned around to head back south. Don’t miss the Linn Cove Viaduct further north, as only one example. Side trips to the towns of Blowing Rock and Boone, NC are great!

WE RECOMMEND THE FOLLOWING MILEPOST STOPS

Be sure to visit Cherokee, the reservation home of the Eastern Band of the Cherokee Nation. At Oconaluuftee Village, you can view how life was for these noble indigenous people.

Native arts and crafts of very high quality are sold in Cherokee. We were lucky to be in Cherokee during a festival and got to watch archery contests alongside Native Americans dressed in traditional garb.

Cherokee history is fascinating. Barbara (The Shining Woman) Warren in The Powersource (http://www.powersource.com/cocinc/language/history.htm) states that:

…linguists believe that the Cherokee migrated from the Great Lakes area to the Southeast over three thousand years ago.

In 1540 the Cherokee lay claim to a territory comprising of 40,000 square miles in the southeastern part of what later became the United States. This area included parts of the states of Alabama, Georgia, North Carolina, South Carolina, Virginia, West Virginia, Kentucky and Tennessee.

In the winter of 1838, the Cherokee Nation was forcibly removed from what was left of their original lands in the East. 20,000 people were forced along the “The Trail of Tears” to the Indian Territory of northeastern Oklahoma. Over 4,000 Cherokees died. The journey was known by the Cherokee as nu-na-hi du-na tlo-hi-lu-i, the “trail where they cried.”

Several hundred Cherokee evaded removal by hiding in the mountains of North Carolina. In 1849 they were given the right to remain on lands purchased in their behalf. It later became the Qualla Reservation.

At the time of the first contact with Europeans, the Cherokee occupied three distinct geographical regions. Three distinct dialects were spoken: Eastern, Middle and Western.

The Eastern or lower dialect is now extinct. Its chief peculiarity is a rolling “r”, which takes the place of the “l” of the other dialects. The Cherokee speakers of the Eastern dialect occupied what is now South Carolina and made the first contact with the British. Due to the wars and conflicts of the 1800’s, the few remaining speakers were absorbed into the other Cherokee groups further inland.

The Middle dialect (Kituwah) is spoken by the Cherokee now living on the Qualla reservation in North Carolina. In some of its phonetic forms it agrees with the Eastern dialect, but resembles the Western in having the “l” sound.

The Western dialect (The Overhill) is spoken by the Cherokee Nation in the West. Because of their isolation, the Kituwah dialect was less impacted by the influence of other Indian cultures and the many conflicts the Western Cherokee encountered. The Overhill dialect is the softest and most musical of this musical language.

MILEPOST 455.0: This is the route to the Mile High Overlook. The road converges with Heintooga Ridge Road to the Smoky Mountains National Park at Black Camp Gap.

MILEPOST 451.2: Waterrock Knob will give you a view of 4 states with a loop trail, toilets and a visitor center.

MILEPOST 422.4: Devil’s Courthouse. There is a 40-minute steep walk to the “Courthouse” Falls.

MILEPOST 418.8: Graveyard Fields Overlook. This overlook sees the earliest change in autumn color on the Parkway. There are two waterfalls with the first one only a short hike from the parking area. To see the second waterfall, cross the bridge and turn right until you see the trail intersection to the right.

MILEPOST 413.2:  Pounding Mill Overlook. During late September, Monarch Butterflies gather at this section of the Parkway on their way to Mexico for the winter.

MILEPOST 431: Richland Balsam is the highest point on the Parkway at an elevation of 6,074. There is a self-guided trail through the forest at this milepost.

MILEPOST 364.4: Craggy Gardens and the Pinnacle are a MUST in June! The summits are covered with blooming Rhododendron. The trees on the trail to the summit are out of a storybook and lend an “enchanted forest” feel to the entire hike.

MILEPOST 355.4 is Mt. Mitchell, the highest peak in the Appalachian Mountains as well as in the mainland eastern North America. The mountain’s elevation is 6,684 feet.

MILEPOST 350.4: Green Knob Overlook is the site of a Forest Service Lookout Tower built in 1931. It almost collapsed before a renovation in 2013. The top (cab) of the tower is only open for special events but the staircase can be climbed for a fantastic view at 5,080 feet. To reach the Tower, you must hike a very strenuous 3.3 mile trail from the Black Mountain Campground, a 5.5 mile hike on the Mt. Mitchell Trail or a full-day hike of 8.8 miles by parking at the summit of Mt. Mitchell and hiking down to the Black Mountain campground for the rest of the trek.

MILEPOST 320.8: Chestoa Overlook is at an elevation of 4,090 feet.  The vista is fabulous but cannot be seen from the parking area. Since it is only a 1/4 mile walk to the walled viewing area, it is a favorite for weddings and photographers. This trail can get crowded. From here you have a view of Grandfather Mountain and Table Rock.

MILEPOST 316.3: Linville Falls is a spectacular three-tiered waterfall that plunges 90 feet into a pool. There are five ways to get to the falls. We reached Linville Falls too late after dark for photographs. To research trails to the falls and photos, go to: https://www/visitnc.com. Swimming in the Linville River or at the Falls is not allowed because it is too dangerous. Don’t miss this spectacular waterfall!

MILEPOST 314: LINVILLE GORGE WILDERNESS covers over 12,000 acres. From the gorge’s rim, the Linville River runs 2,000 feet below. Linville Gorge is the third largest gorge in the United States with five species of rare plants. There are 39 miles of hiking trails in the gorge but this is rugged and steep terrain and trails are not well marked. To see description of the various trails, go to: https://www.hikinginthesmokys.com.

The Gorge is near Linville Falls, where you can catch a dirt road to Wiseman’s View of the gorge. The drive will take up to 45 minutes due to the condition of the road. We reached Wiseman’s View just at twilight and watched a full moon rise in the east.

The Linville Gorge was the first designated wilderness area in the East in 1964. 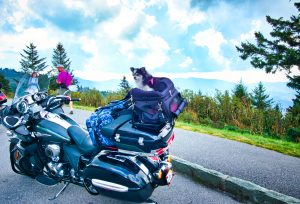 Whatever the season, there is something for EVERYONE on the Blue Ridge Parkway! This fella rode “his” bike all the way from Florida!